Vaping: A Fad or Trend?

So, how do you know if something is a fad or a trend?  Both become social fascinations and mainstream successes, but how they get there is fundamentally different.  Fads tend to appear out of nowhere (within a year) and then disappear nearly as fast.  Trends slowly build in popularity over time.  They have a much longer base of interest before they burst onto the mainstream scene.

To visualize, look at this chart comparing the search terms “Vape”, “Electronic Cigarettes”, and “Vaping”. Notice how there were some Google searches for these terms even as far back as 2004?  Also, notice how the slope angle of the blue, red, and yellow lines gradually increase over time?  Hon Lik, a Chinese pharmacist and inventor patented the modern e-cigarette design in 2003.    But it wasn’t until 2009 that we saw a significant uptick in the popularity of the “Electronic Cigarette” search term.  That’s a 6-year long base.

Now contrast the slopes of these vape terms with the green line.  This represents the search term “Rainbow loom”, which is a children’s toy.  Notice how in mid 2013, people suddenly began searching for this term?  Like a rocket ship, the popularity sees an almost vertical rise, reaching its height in late 2014 before crashing back down to near its breakout point.  This is typical of a parabolic fad.  Boom, then bust.  Sure they are fun while they last, but they have no staying power.  And that’s how you can tell the difference between a fad and a trend. 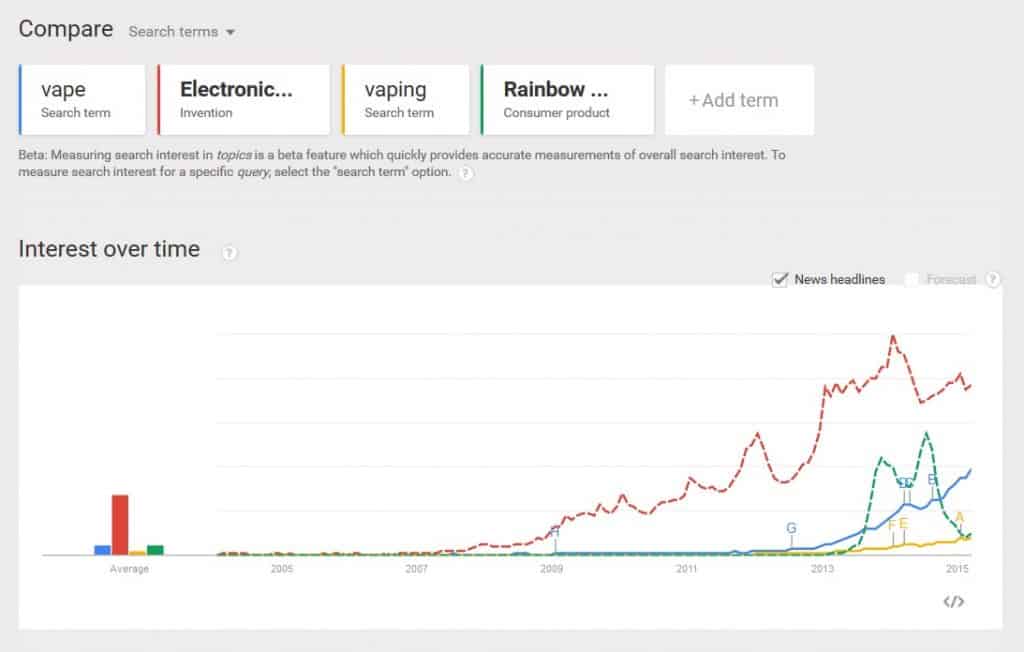 Based on this visual graphic, vaping does not share the characteristics of the typical fad.  Rather, it appears that vaping is indeed a new trend, a fundamental shift in people’s behavior and perceptions about smoking and its alternatives.

So, if you’re a smoker who has been waiting on the sidelines, reluctant to try vaping and secretly hoping that “this too will pass” – it looks like ecigarettes are here for the long haul.