*** VAPEVINE VERDICT:  “The POSH PLUS  is a game changer in the disposable vape market for Canada.  With the industry’s longest-life battery and a massive 2ml ejuice capacity, the POSH PLUS will last you for days (500 puffs) before it’s done.  Nice flavours and good vapor production also make this a hit!  ***

100% Authentic Posh Plus.  Now available in Canada, the Posh Plus provides you with a loose, relaxed draw with more vapor production than its predecessor.  With its new cylindrical design, housing a larger 480 mAh battery that is good for 500 puffs, the Posh Plus is built to last.   What’s more, this is one of the largest pre-filled, disposable pod systems on the market, giving you both the long battery life and the most ejuice at 2.0ml capacity. 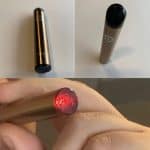 Draw-activated red LED light on the Posh Plus

The draw-activated, red LED at the base of the device is also a nice touch.

So, if you’re the type of person who doesn’t want to be bothered with tanks, or bottles of ejuice, this disposable Posh Plus could be right for you.  At 6% nicotine salt by weight, the Posh Plus definitely packs a punch.

Posh Plus FROSTED APPLE flavor profile:  The right combination of sweet and sour  green apple with just a hint of frosted, refreshing cool on the exhale.

POSH PLUS DISPOSABLE VAPE FEATURES AT A GLANCE:

Vaping liquids containing between 10 mg/g and less than 66 mg/g nicotine meet the classification of “toxic” under the CCCR, 2001.

**WARNING: CONTAINS NICOTINE** Nicotine is an addictive and toxic substance, and the inhalation of propylene glycol is a known irritant. Use of nicotine during pregnancy may harm the fetus. Read about some of the risks of electronic cigarettes and liquid nicotine in our Terms, Conditions & Waiver of Claims page. Also, please visit the Health Canada website for further information about Nicotine and Addiction.

CONTENTS HARMFUL. Do not swallow. Avoid contact with skin and eyes. Keep out of reach of children and pets.

There are no reviews yet.